Through our mission-aligned Donor Services program, NEO helps donors and groups carry out their visions for social justice. Today we’re shining the spotlight on one such project.

The Circle for Justice Innovations (CJI) funds grassroots organizations to end mass criminalization and incarceration, especially among vulnerable communities. Early on, CJI recognized the need to support organizations working to address the unique set of issues facing the transgender community when it came to ensuring justice in the criminal legal system.

CJI engages several organizations working on transgender rights and empowerment, including TGI Justice Project, TRANScending Barriers, Trans Queer Pueblo, Brave Space Alliance and other groups. Through its work, CJI has learned of the horrific situations that trans people face in their own communities as well as at the hands of police.

“After they were criminalized when they were put in prisons, they were the most likely to be abused—sexually, repeatedly, and in all types of ways—and they were the least likely to be defended or protected by guards,” CJI executive director Aleah Bacquie Vaughn explains. “We felt strongly that we needed to bring more attention to what was happening with them.”

In order to learn more, CJI invited members of the transgender community to meet with them and share their stories. “We listened to them talk about how they were being sidelined, marginalized, oppressed,” Bacquie Vaughn remembers.

That meeting illustrated a critical need: That directly affected people were needed in leadership positions in order to ensure the voices of trans individuals were centered in any decision-making that affected the trans community.

“They were the ones who were experiencing these atrocities and yet they could not be part of their own liberation struggle. They were not being hired to work for the organizations that were supposed to be addressing these injustices,” Bacquie Vaughn says. “And it was in that meeting that we said we wanted to focus on promoting the leadership of formerly incarcerated people in the criminal justice system.” 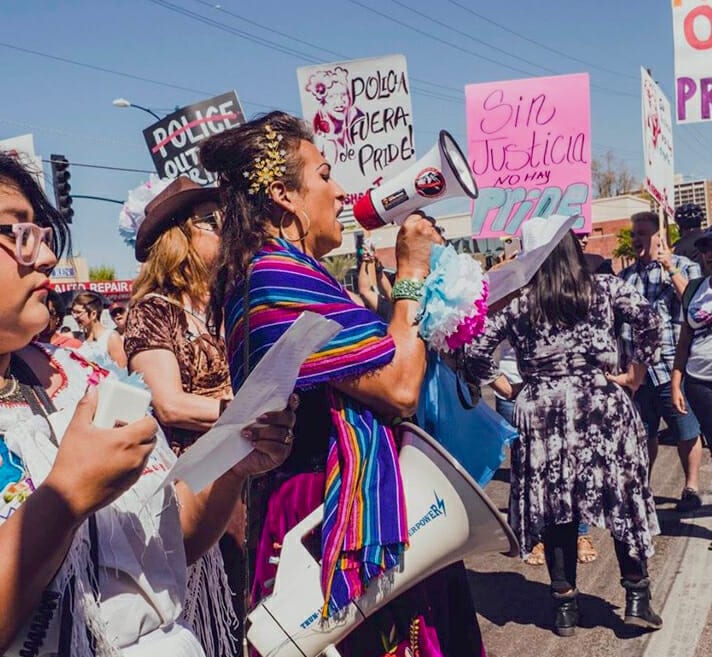 A New Model for Giving

CJI did just that by adding criteria that grantees must have directly impacted people in leadership positions. For example, a group that bills itself as a trans organization must have trans people in its leadership.

“We feel strongly that organizations led by trans folks, working on behalf of trans folks, should always be integrated, because we need to understand that trans people are impacted by all these issues just like everyone else,” Bacquie Vaughn says. “They’re impacted by the war on drugs, they’re impacted by housing, by discrimination against formerly incarcerated people, by border migrant atrocities, they’re affected by every other issue—by bail reform, by probation and parole, by conditions of confinement. All of those issues impact trans folks at usually a higher percentage and in greater intensity.”

Social worker and Outlaw Project founder Monica Jones is a member of the grant-making team for Starving the Beast, a CJI fund that supports community-based initiatives aimed at reducing incarceration as a response to criminalized behaviors such as drug use and sex work. Jones, a black transgender woman, made national headlines in 2014 when she was arrested for “walking while trans” in Phoenix.

CJI’s model of including directly impacted people in the grant-making process is key, Jones says. “It’s important because it’s not someone who doesn’t have any experience within that field making decisions, whether it’s drug use or sex work. It’s the best practice of grant-giving in philanthropy,” she adds. “It’s very important that people who have that lived experience are at the table.”

Transgender people face ongoing pervasive mistreatment and abuse, according to a 2015 study: job and housing discrimination, verbal and physical abuse, sexual assault, police harassment, and much more. In 2019 alone, at least 22 transgender people—nearly all black women—were killed, according to the Human Rights Campaign.

The 2015 study showed that 30 percent of respondents who had a job reported being fired, denied a promotion, or experiencing some other form of mistreatment in the workplace due to their gender identity or expression, such as being verbally harassed or physically or sexually assaulted at work.

The situation is especially dire when it comes to the criminal justice system. The majority of transgender people say they are afraid to go to the police when they need help. In prison, transgender inmates face much higher rates of abuse than other prisoners—as much as 10 times as likely to be sexually assaulted by other inmates and five times as likely by staff.

“It’s critical for us to ensure that the people who are the most abused, the most discriminated against, the least likely to be employed, or housed properly are the people that we should be working the hardest to ensure are taken care of,” Bacquie Vaughn stresses. “Because if we will take care of those who are the most neglected and the most abused, then we know we’ll take care of everyone else.”