NEO Philanthropy is committed to uplifting the voices of marginalized communities who are our grantees and partners and working to make the world a more equitable place. In honor of Pride Month, we will profile a few of the many organizations, leaders and NEO partners who are making waves in the LGBTQ space. 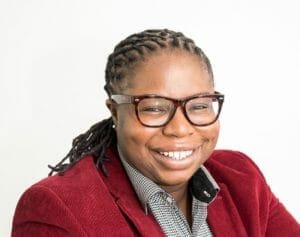 La’Tasha never set out to be the advocate she is now. But as she put it, as you grow into your own identity, you realize it informs your work and what you want to pursue in life. Figuring that out came easy for La’Tasha – she has dedicated herself to advancing the health and well-being of Black women, femmes and girls. To La’Tasha, fighting for Reproductive Justice, women’s rights and LGBTQ+ rights goes beyond having power over your body. Reproductive Justice encompasses being who you are and that includes the human right to control your sexuality and gender without fear of rejection or violence and living in a world that respects intersectionality of identity.

For 14 years, New Voices for Reproductive Justice has prioritized keeping LGBTQ+ people of color centered in the movement-building for Reproductive Justice across Pennsylvania and Ohio and across the country. It is a foundational piece of their work that will not be complete until we all live in a world where it is no longer an expectation that Black trans women will be killed or queer Black and Brown folks face discrimination because they want to live their fullest lives.

Through her work and leadership at New Voices, La’Tasha is building power with communities most impacted by race and gender oppression. New Voices is amplifying the voices of Black women, femmes and girls through leadership development, community organizing, policy advocacy and culture change to advance sexual & reproductive Health, LGBTQ+ rights, health care access, ending gender-based violence, ending mass incarceration and environmental justice. All of these intersections are imperative to address because they consistently affect the New American Majority specifically voters of color.

New Voices began its work in 2004 registering young Black women to vote in the Presidential Election. Over time, New Voices created the Voice Your Vote! Project, their integrated voter engagement (IVE) program to engage Black women Pennsylvania and Ohio. Integrated voter engagement is an ongoing process to build voting power for every election, increase the scale and effectiveness of community organizing efforts and develop new activists for leadership. Their IVE efforts in 2016 also focused on Black LGBTQ+ voters as specific engagement is rarely a priority. Voting is a basic human right, and through voting, we can construct a democracy that is representative and reflective of the Black women, femmes & girls and LGBTQ+ people color La’Tasha and New Voices serves.

La’Tasha has learned a lot from her many years innovating within the Reproductive Justice movement but what keeps her going is knowing that change is both incremental and overnight. She believes that justice is possible when you have a vision for liberation and human rights that center those who are most marginalized.

“When working in social justice, and especially in Reproductive Justice, your lived experience is your expertise.”

Pride Month Spotlight: Moving from the Margins into…