This post was written by Melinda Fine and Steven Laworiginally appeared on TCC Group Blog.

The speculation for most of us began on Wednesday morning, November 9, 2016.

Regardless of political affiliation, the election win by a presidential candidate who promised dramatic changes in governing style and policies from the prior administration meant that grantmakers might have to rethink their current strategies and, quite possibly, fundamental priorities. As the new administration’s policy agenda rolled out over its first year in office, the interest areas of more and more funders were touched by the shifting political landscape. 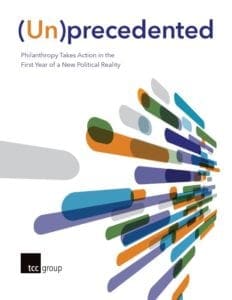 Beyond the impact of these policy changes on individual grantmakers, we began to ponder what this meant for the field of philanthropy as a whole; not just grantmaking institutions, but also the many philanthropy-serving organizations (PSOs) and funder collaboratives that exist to strengthen funder effectiveness through joint learning, alignment, and action. We wondered whether the initial flurry of conversation had led to more formal engagement and even collaboration in responding to the evolving policy priorities. And, if it had, what was the type and scale of their responses? Were they timely? Did they have the potential for catalyzing longer-term changes in the sector?

To begin to answer these questions we talked with nearly 30 leaders of PSOs and funder collaboratives in advance of the first anniversary of the new administration. Frontline partners for grantmakers and close observers of trends across the sector, these leaders described a philanthropic field demonstrating flexibility, nimbleness, and a willingness to collaborate that can serve as a model of creative adaptation for the sector going forward. They also identified enduring challenges for the sector that have been amplified in these unpredictable times.

We’ve documented our findings in a new report, and key insights include:

Not all of our questions, or those of the leaders we spoke with, could be answered through these conversations. Arguably, the most salient questions still to be addressed are:

Throughout 2017, more funders showed themselves to possess the adaptive abilities necessary to make a difference in the twenty-first century. The years 2018, 2019, and beyond will show just how pivotal this political epoch will ultimately be for how grantmakers do their work and make a difference going forward.

“My job is to help you succeed” – Taking Stock of the Anti-Trafficking Fund’s Capacity-Building Program.

Slow and Steady Wins the Race: Ten Years of the State Infrastructure Fund